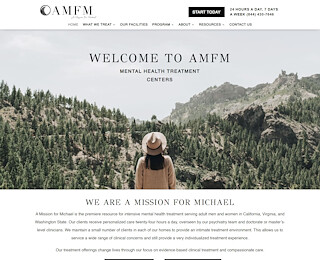 Bipolar disorder is a mental health condition characterized by extreme mood swings that often alternate between emotional highs and lows. During the emotional high, they feel full of energy, unusually irritable, and euphoric. However, they become intensely sad and lose interest in activities that normally excited them when the emotional 'low' sets in. These swings can have a negative impact on work, relationships, and general well-being.

If you or anyone you know has bipolar disorder, you will most probably need Orange County bipolar treatment from a competent facility. As one of the leading mental health treatment centers in Southern California, A Mission for Michael offers comprehensive bipolar treatment that can completely heal you or your loved one. Our treatment approach focuses on helping clients develop healthy coping skills and seamlessly integrate into society after treatment.

Extensive research shows that bipolar disorder is caused by a mixture of nature and one's environment. An imbalance of neurotransmitters, coupled with certain life experiences, is common among many battling bipolar disorder. The condition is also known to be hereditary. So, if an individual has a family member who has or had bipolar disorder, they are more likely to develop the condition.

What are the features of bipolar disorder?

A manic episode is the 'high' of bipolar disorder. During manic episodes, the patient becomes reckless and impulsive, such that they'll continuously put themselves in harm's way. They may also become unusually irritable, suffer mood drops, hallucinate, and experience feelings of grandeur or exaggerated self-esteem.

Hypomanic episodes are quite similar to mania but much less severe. The patient may experience extreme restlessness, which could lead to difficulty sleeping.

During a major depressive episode, the patient experiences five or more of the following symptoms:

What is the goal of bipolar disorder treatment?

Bipolar disorder has severe consequences on the individual's state of mind, which extends to their work and relationships. The unpredictability and extreme mood swings characterized by the disease can make it difficult to achieve any form of stability. Orange County bipolar treatment aims to reduce the occurrence of manic, hypomanic, or major depressive episodes to the barest minimum. This is achieved by a combination of therapy and prescription medicines, under the supervision of expert clinicians

Furthermore, people who have bipolar disorder are known to turn substance abuse for succor. If the patient is already addicted to alcohol or other drugs, a competent Orange County bipolar disorder therapist will address the substance use disorder while also taking care of the root cause.

Do you need expert therapists for bipolar disorder treatment in Orange County? You need not look beyond A Mission for Michael, the leading mental health treatment center in Southern California. Contact us on (844) 532-8882 to learn more about our programs or verify your insurance.